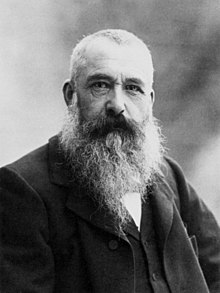 Claude Monet (1840 - 1925), the founder of Impressionism, was one of the most influential landscape painters in the history of art. Born in Paris, Monet met fellow Impressionists Renoir, Sisley and Bazille while enrolled in the studio of Glenyre. Monet painted outdoors to convey the fleeting effects of atmosphere, time of day, and season upon color and light. He represented natural color like a prism, breaking it down into its individual components. He often painted a series of the exact same view under different light and weather conditions.

Monet's ambition of documenting the French countryside led him to adopt a method of painting the same scene many times in order to capture the changing of light and the passing of the seasons. From 1883 Monet lived in Giverny, where he purchased a house and property and began a vast landscaping project which included lily ponds that would become the subjects of his best-known works. In 1899 he began painting the water lilies, first in vertical views with a Japanese bridge as a central feature, and later in the series of large-scale paintings that was to occupy him continuously for the next 20 years of his life.

Madame Monet in a Japanese kimono, 1875, Museum of Fine Arts, Boston
The first Impressionist exhibition was held in 1874 at 35 boulevard des Capucines, Paris, from 15 April to 15 May. The primary purpose of the participants was not so much to promote a new style, but to free themselves from the constraints of the Salon de Paris. The exhibition, open to anyone prepared to pay 60 francs, gave artists the opportunity to show their work without the interference of a jury.
Renoir chaired the hanging committee and did most of the work himself, as others members failed to present themselves.

You have successfully subscribed!

Please login and you will add product to your wishlist